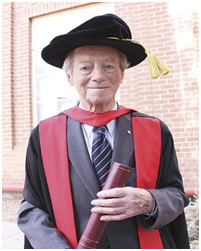 Denis Molyneux represents the Project’s earliest connection with the ‘birth’ of the UK sports centre, which followed the Report of the Wolfenden Committee in 1960. Denis was later a member of the Working Party that produced ‘Planning for Sport’ in 1968. These two reports set the national agenda for subsequent sports provision, not least sports centres.

Denis Molyneux was born in 1925 in Braunston, Northamptonshire and grew up in Welwyn, Hertfordshire. He was educated at Queen Elizabeth’s School, Barnet. After service in the Fleet Air Arm he attended the University of Birmingham and later the University of Newcastle, completing an MA in history in 1957. As a first-class researcher, he joined David Munrow, Director, and Peter McIntosh, Deputy Director, at the Physical Education Department of the University of Birmingham in 1958. Denis worked closely with David and Peter. They strenuously pursued the Wolfenden recommendations and were staunch supporters of proposals to establish an advisory Sports Council. Denis and David were important friends of, and advisors to, Denis Howell MP, Minister for Sport. The two University men met the Minister of Sport privately, were delighted to hear he would set up a Sports Council, urged him to chair it, and suggested a proposed structure for the Council, which was adopted. 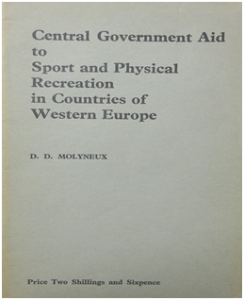 The decade of the 1960s saw a new field of research and documentation in sport, and Molyneux was at the forefront of this activity. Denis had written a research paper in 1962 – ‘Central Government Aid to Sport and Physical Recreation of Countries of Western Europe’ which, following on from Wolfenden, radically influenced national thinking. Indeed, Denis Howell waved the report in the report in the House of Commons whilst arguing for a sports council. (An original copy from Denis is now in our Project library).
When the advisory Sports Council was first established in 1964, Walter Winterbottom, former England soccer manager and General Secretary of the CCPR, was seconded to be Director. Recognising his important role, Denis was seconded from Birmingham University to be Deputy Director. After these roles, Denis became Director of Recreation for Luton Council in 1971 and then, in 1973, Director of Recreation for Northamptonshire County Council. Denis was a member of the working party for ‘Towards a Wider Use’ [Joint Provision] published in 1976.

Denis and his wife, Marjorie, who also worked for the Sports Council, moved to South Australia in 1975. Denis moved to Salisbury College of Advanced Education in Adelaide. He was made a Member of the Order of Australia in 2005 for sport and recreation services for disabled persons. In 2009 he completed a PhD in social history at the University of Adelaide. In 2015 Denis published ‘Time for Play’, which examines recreation and moral issues in colonial South Australia and the developments in the colony. It shows how recreation improved the lot of first the working class, and eventually, society as a whole. Denis lived with his wife in Leabrook, South Australia and they kindly contributed to the story. Denis died in 2019.