Like many initiatives that started in the early days of sports centre management, the Sports Council Award, which sought to find the best managed sports centre in the country, was the brainchild of that dynamic, diminutive duo, Ted Blake and Harry Littlewood. They were instrumental in creating the Recreation Management Conference and Exhibition (RecMan) which was one of the first fora which enabled the fledgling profession to gather and discuss common issues and it was from that base that their working relationship began.

Harry and Ted were already well known and respected in the industry; so when Ted’s company, Nissen International Sports Equipment, won the British Institute of Marketing Award for 1975 for their innovative approach to marketing and publicity; Ted approached Harry to suggest that a similar award for sports centre management would be a good way of spreading good practice and encouraging improvement in the emerging leisure management discipline.

Ted provided initial sponsorship of £10,000 as well as a trophy and the award was launched at the RecMan Conference in 1975. Ted felt that the award needed a wider management perspective and approached the British Institute of Management (BIM) to be involved in the assessment process (it was constantly stressed that the process was “assessment” rather than “judging” as the aim was to encourage improvement and assess how centres were performing against their own policies rather than some form of “beauty contest.”) Or as the Award’s original promotional material put it

“The aim of the award is to find the centre, which in the opinion of the assessors, best combines efficient and enterprising management with attractive facilities, reasonable charges and a balanced range of activities which cater for all sections of the community.”

As well as the BIM, the Association of Recreation Managers (ARM) and the Institute of Recreation Management (IRM) were also invited to participate on behalf of the profession. All three organisations agreed to nominate representatives to a national assessment panel and to regional panels covering the nine English regions, Wales, Scotland and Northern Ireland. Further assessors from the regions were also involved; these could be suitably experienced members of the regional/National councils or a member of the regional staff.

In order to encourage consistency of evaluation, an assessment checklist was prepared following a “consultative colloquium” to which leading figures in the industry were invited. The checklist identified some of the key indicators of managerial competence and success.

Ted was a strong advocate of Peter Drucker’s “Management by Objectives” approach. He believed “if you can’t write it down, how do you know if you’re doing it right?” Linked to objectives were the  establishment of management targets and measurements; again his philosophy was “measuring success is the key to achieving it.” Thus the existence and measurement of written Aims, Objectives and Targets was one key to the assessment process.

In addition it was acknowledged that different providers would have different policy approaches to provision, often guided by political philosophy and so the assessment judged success by how well the management of the centre achieved the policies of its sponsoring Local Authority (in all cases in the early years entry was from Local authority or local trust centres) not against any hard and fast imposed national criteria or standards.

There were also assessment criteria on the breadth and imaginative nature of centre programming, technical competence and innovation, marketing and promotion, and the involvement of staff and customers. Financial criteria were also assessed within the overall policy framework. Each main criterion was further broken down into a series of assessment questions to assist the assessors and ensure comparability of outcomes. Each main category was given a relative value and each individual criterion was given a numerical mark out of ten; the final “score” being obtained by multiplying the individual assessor’s marks by this relative value and aggregating all the assessors score to reach a final total.

Assessors were also given the opportunity to award their own additional marks based on what was essentially their “gut reaction” to the centre they had seen.

The original checklist was drawn up by the staff in Harry Littlewood’s Facilities Unit. The draft assessment checklist was signed off by Ted, Harry and the national BIM, ARM and IRM representatives before it was finalised. Staffs of the National and Regional councils were then briefed on its use and interpretation.

Once the National and Regional panels had been established applications were invited and in the first year over 70 centres applied to be assessed.

The assessment process involved each centre submitting a written dossier covering a set of outline criteria published by the Sports Council (the checklist itself was not published initially and was only known to the assessors, thus centres had an opportunity to express themselves on their own terms.) These dossiers were distributed for study by the assessors. The National/ Regional officers then organised visits to each entry. During this visit the centre was encouraged to be represented by a Member of the sponsoring authority (often the Chair of the relevant committee,) the service Chief Officer, if there was one, the Centre Manager who would lead the presentation, a finance officer and any of their staff they chose.

At the visit the assessment panel toured the centre unaccompanied to get an understanding of the scale and quality of the facilities. They were also encouraged to talk to staff and customers before receiving a presentation from the manager, interviewing the management team and asking questions of clarification on the written submissions as well as completing the assessment checklist.

The interviews followed the checklist criteria and the assessors completed their marks on the checklist before these were returned to the regional office for the maths to be completed. The assessors were encouraged to give verbal feedback to help the centres at the assessment meeting but most preferred to give written comments as collective feedback at a later stage.

David Heddon, founder Chairman of the Kirklees Active Leisure Trust, and at the time a Senior Regional Officer of the Sports Council’s Yorkshire and Humberside Region recalls, “my overriding memory in this region was that (the Award) was always well supported, and regarded as a prestigious award with national recognition for outstanding management practice.” Huddersfield Sports Centre, in Kirklees, went on to win the National award in 1977.

Once all of the centres in a region had been visited the regional staff compiled a final score for each centre and ranked them in order before consulting with the panel before declaring a regional winner.

The first Award winner was Pontypool Sports Centre in the Borough of Torfaen, South Wales who won £1000 and the trophy. The centre was managed by Bill Breeze under the direction of Jimmy Munn. Bill subsequently went on to become the first leisure centre manager to become a local authority Chief Executive and Jim was later to be Leisure Director for Birmingham City Council.

The centre’s win led to a widespread publicity and adoption of the ‘Torfaen Approach’ (Neighbourhood Opportunity) a management system characterised by a wide and diverse approach to programming which matched sport with community events, from dog shows to choir concerts; a close link with education and the encouragement of young people’s participation; clear political and strategic direction and a strong social ethic and customer focus. This was additionally popularised by Jimmy Munn who became a much in demand speaker at National and regional events where he promoted the values of sports centres as essential community resources and as an economical palliative to many community problems.

The Award continued under Nissen sponsorship for 5 years followed by sponsorship from Vendepac, one of Britain’s leading vending companies, up to 1985.

The award was not immune to criticism from within the profession, much of which was aimed at the timescale, the expertise and approach of the assessors and the assessment criteria. Others criticised the way the award sought to compare large and small, joint or single provision centres; excessive emphasis on presentations and financial criteria. The Sports Council sought to address some of these issues by introducing an award for small centres only in 1979 and Joint Provision centres only in 1981 and on a subsequent cyclical basis. It also worked with its partners to ensure that the panels had a wide range of skills and experience and as one of the assessors noted “if you can’t present a cogent case for your centre to your peers, how do you expect to successfully market it to your customers?”. (Past Assessor’s Reflections)

However, the majority of entrants and managers saw, in the Award, an opportunity to obtain positive, independent feedback on their performance and to reinforce training and personal and corporate development within their centres and, if they were successful, get some local or National recognition for their efforts. Many of the winners, like Pontypool, became benchmarks for others to learn from and emulate.

Speaking in 1983, the Chairman of The Sports Council, Dick Jeeps said: “The Sports Council has always placed great importance on the Award as a training exercise and as an incentive to management.  It is more than just a competition: its main value lies in the exercise of self-examination to which all entrants subject themselves in the process of compiling their entries. I believe that the expert feedback they receive from assessors is much valued”.

The award continued until the mid-1990s when it was, in effect, superseded by  quality management assessment systems such as Quest, Chartermark or Beacon Centres. It is notable that all of these systems used broadly similar methods and criteria to the Award using written submissions, checklists and assessment visits from selected and accredited peers as ways of identifying places where good practice could be observed and rewarded and whose managers and systems could act as benchmarks for others to aim towards. 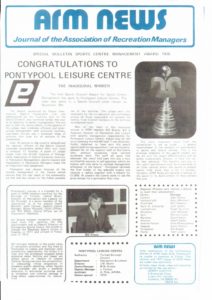 The 1983 Award Report recorded changes from that year onward with extra categories, involving many more centres. The 1983 winners were as follows: – 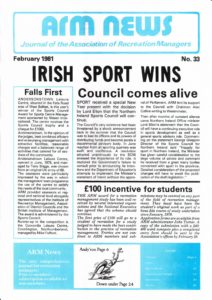 Category 3: design of a poster:

The 1995 Award sought to explore the enormous impact of Compulsory Competitive Tendering (CCT) and particularly the contractor/client partnership in action.

Since 2016 UK Active (previously known as the Fitness Industry Association), has operated a comprehensive award scheme which has included sports centres and operators, with 20 national and regional awards made in 2019. Club/Centre of the Year was Life Leisure Stockport Sports Village.