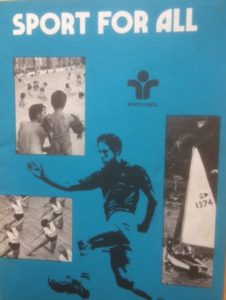 Over the years ‘Sport for All’ has become widely accepted in the UK as a generic slogan for broad aspects of sports activity. In the UK it may have originally arisen from The CCPR theme in the early 1960s of ‘Opportunities for All’, and pursued, as we see in Chapter 1, through the Wolfenden Report and other pioneering reports and initiatives.
‘Sport for All’ is not a philosophy exclusive to the UK. It has been adopted in many parts of the world. The Council of Europe’s concern for sport was culturally based and in 1968, at a meeting in Bruges, it adopted idea of the right to sport for all, laying the foundations for a democratic approach to modern sports activities, whereby everyone, regardless of age, colour or capability, has the opportunity to participate. In 1975, in Brussels, a European Sports Charter was adopted by the 1st Conference of European Ministers responsible for Sport. 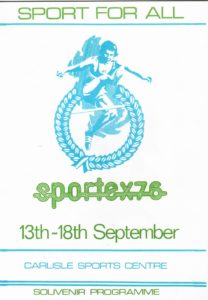 The longevity of the approach in the UK was reflected in a Sports Council report in 1985 – Study 26 – ‘The Impact of Sport for All Policy 1966-1984’, which reviewed the broad and extensive progress made in sport and identified a way forward. The definition of ‘Sport for All’ adopted by the Sports Council stressed that elite competition was as much part of ‘Sport for All’ as the provision of community opportunities for participation, which had received huge encouragement and support from the Sports Council. Nonetheless that did not disguise some of the tensions between what can be conflicting priorities between the two.
A great impetus was given by a range of Sports Council led initiatives through the 1970s, peaking with a major national ‘Sport for All’ week in September 1976. The climax involved famous sportsmen and sportswomen competing in unfamiliar sports at the Crystal Palace National Recreation Centre. Bob Wilson (ex-Loughborough and Arsenal goalkeeper) and BBC Football Focus presenter, reported it all during BBC Grandstand on Sept 25th, 1976. The largest single sports centre event programme held as part of the Week was ‘Sportex ’76’ in Carlisle.

Between 1975 and 1991 a range of other specifically targeted initiatives were mounted by the Sports Council with the objective of increasing participation: – 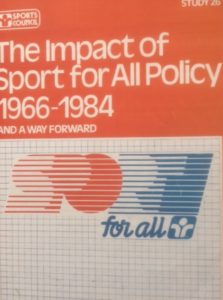 On reflection, the overall ‘Sport for All’ approach perhaps developed into a convenient umbrella for changing priorities, rather than a coherent policy in itself. Nonetheless it did achieve significant impact overall, as recorded in a 1984 review.