1.1. This case study highlights the difficulties of replacing major public sports facilities in an era when commercial partnerships were all the rage and trusts were in their infancy. The Cambridge facilities discussed have several unique elements and it is a project with a happy ending.

1.2. Cambridge is well known as a centre of academic excellence but its public indoor sports facilities were average to poor until the first Leisure Strategy was written by the Leisure Services in house team in 1993.

1.4. A unique feature of the 1963 pool (built at a cost of £248,000) was that it was adjacent to, and shared a plant room with, Kelsey Kerridge Sports Centre. Unusually the council owned sports centre was also built into a multi storey car park. In addition to this physical situation, in order to keep revenue costs down, the City Council had vested the management of the sports centre to Cambridge Sports Hall Trust Limited from its opening in 1975, making this one of the earliest leisure trusts.

1.5. 1984 marks the start of the redevelopment of these facilities when the City Council determined to sell or lease the pool site. There followed a series of attempts to use commercial funding to provide a replacement pool, briefly these are:

1986: “Massive interest” from developers for the site.
1987: Plan to redevelop with flats and 1000-space car park. Alternative plan to refurbish pool for £1M backed by Council.
1989: Approval given for multi-million-pound “tropical paradise” pool.
1991: Planning Brief issued by City Council for commercial development to fund new pool. Big protest campaign when indefinite closure of pool suggested until a developer was found.
1993: Plan for developer to build a 160 bed hotel, 8 lane 25 metre pool and bar/restaurant on the site. Council making a capital contribution and seeking FSA and National Lottery grant aid. Lord St John-Stevas (Chairman, Royal Fine Art Commission [RFAC] and Master of Emmanuel College) described it as an “eyesore”. An alternate plan for simple refurbishment was adopted.
1994: The City Council spent £100,000 on buying the plans for the failed 1993 development from the original developer, securing copyright for the plans and the services of the design team which produced them.
1994: Cost to residents of replacement facility estimated to be £1M, then £3.5M.
1995: Scheme scrapped.
1996: May: Officers reported to Councillors that the plan for a leisure pool and housing would actually cost £8.5M and that the present pool would have to close whilst work is in progress. The running costs would be £1.1M, compared with £525,000 then. The City would pay £850,000 of the capital cost, the rest coming from Lottery money.
July: A full Council meeting decided to spend £394,000 on detailed plans for the site, including housing.
August: Cost was estimated as £7.2M. £736,000 was then earmarked for professional fees in 1996/97. The estimated initial running cost was by now £540,000.
New plan to fund rebuilding via housing development and/or Lottery bid. Development brief issued for 25m 8 lane international short course pool, 5m, 3m and 1m diving and learner pool and ancillary leisure facilities. S&P Architects appointed to design facility that integrated Kelsey Kerridge Sports Hall with new pool and provided separate plant rooms for both facilities.
An unsuccessful attempt was made by residents to give the old pool listed building status.
1997: Following further adverse comments from the RFAC (likened to a DIY shed on a retail park), conservation and heritage experts, the new pool’s plans were redesigned and approved by the Planning Sub Committee in January. Agreeing the removal of one lime tree to allow an internal water flume path probably cost c.£100,000 in design revision fees. In March demolition consent was received from the Secretary of State for the Environment.
Lottery Sports Fund application submitted and £7.4m grant approved, the second largest lottery grant in the East of England.
The old pool closed on 20 July 1997. Contractors Wilmott Dixon moved onto the site in August, with a target completion date of March 1999.
The City Council funded the Swimming and Diving Clubs transport to alternative pools throughout the new build.
In March 1999 City Council dropped the idea of providing new housing on the site because the Lottery grant proved sufficient. Final Council contribution was £4m.
The renamed “Cambridge Parkside Pools” combined with Kelsey Kerridge was opened by Trevor Brooking in April 1999. The project was finally completed on time and under budget.
The leisure trust continued to operate the sports centre and the City Council operated the new pools using its in house staff. 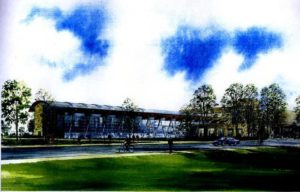 2.1 This was a torturous story of commercial effort to fund a fairly simple public swimming pool at no cost to city residents whilst filling the site (within the Donkeys Common conservation area) with as many hotel bedrooms and commercial income earners as possible. Planning constraints in Cambridge were so strong that many doubted a new pool could ever be built.

2.2 The appointed developer basically gave up the uneven struggle and a year passed before the National Lottery ultimately provided a route for the City Council to resolve the long running problem. With immaculate timing, Sport England announced the availability of funding for major projects and the City Council agreed to prepare an in house bid for £10m of Lottery funding. 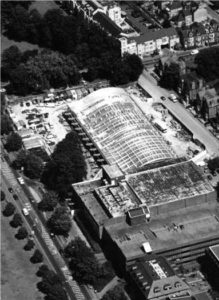 2.3 The project was further complicated by one political party totally opposing the new development (preferring the redevelopment option) requiring the controlling Labour group to call on a minority party to ensure its lottery funded plan was voted through. It took many hours of committee/council discussion and several major reports to complete the internal process. Political determination and detailed administration work finally created a superb new facility albeit at a £4m capital cost and increased revenue commitment. 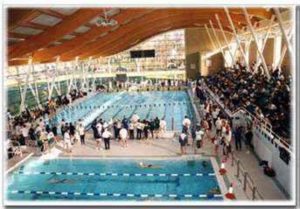