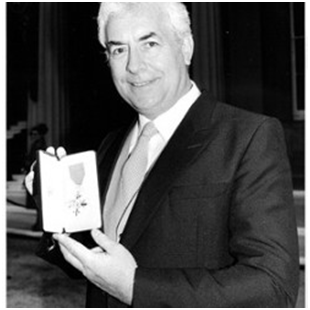 Ron Pickering is probably best known to the wider world as an athletics coach and commentator. He coached Lynn Davies to Olympic gold in 1964 and as Welsh national coach inspired a generation of athletes. As a commentator he covered domestic, international, world and Olympic athletics events, first in partnership with David Coleman and later as the BBC’s lead commentator and the voice of the London Marathon.

However, in the world of sports centres and leisure management he was also a major figure and had a seminal influence on the development of facilities and the leisure profession.

Following national service, Ron trained as a P.E. teacher at Leeds Carnegie and Leicester University and taught in East London before becoming a professional athletics coach. In 1966 he was appointed as the first Director of Sport for the Lee Valley Regional Park Authority (LVRPA) where he was responsible, among other things, for the planning of the Picketts Lock Centre in Edmonton, North London, one of the earliest large scale sports centres. Picketts Lock had wide range of indoor and outdoor facilities and served a wider catchment than its immediate locality, hosting major events as well as local participation. Ron also had an eye for talent in management as well as athletics, recruiting a young Roger Quinton as one of his deputies.

It was through Picketts Lock that Ron met up with George Torkildsen and when he left LVRPA, he joined up with George to create the formidable consultancy company, The Pickering, Torkildsen Partnership, one of the earliest and best respected leisure management consultancies.

As a partnership they worked well together; Ron using his media profile, personality and presentation skills to help win contracts with a wide range of public and private sector clients and George using his unrivalled knowledge of the management and planning of facilities to deliver well considered and compelling feasibility and planning studies which led to the development of some notable facilities including Brixton Leisure Centre and the indoor track at the London (Docklands) Arena. He was also much in demand as a speaker at leisure management events and conferences, although many suspected that the facts came from George while the inspiration was Ron’s own!

Ron’s early death in 1991 at the age of 61 robbed not only the athletics world but the leisure profession of a figurehead and inspiration. The Ron Pickering Foundation, set up in his memory by his wife, Jean and their children continues to provide financial support for young sportsmen and women, having distributed over £20 million to help them meet their aspirations and potential; a fitting tribute to a true legacy legend.