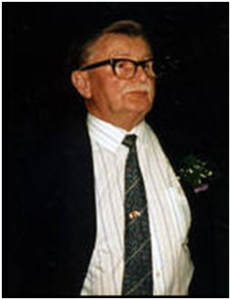 It is rare indeed that anyone could be regarded as a “legend” in more than one discipline, but in the case of Ted Blake it is arguable that he achieved legendary status in three.

After leaving school at 14, Ted became an Army Physical Training Instructor during the War and qualified as a PE teacher in east London and Leeds Carnegie where he gained a Diploma in Physical Education with distinction.  His first teaching post, in Ilford Essex, saw him introduce trampolining to the curriculum, first on a home-made piece of apparatus and later on an American “Nissen” trampoline. His school squad became so expert that they were invited to perform at the Festival of Britain in 1952 and appeared in Newsreel films and exhibitions nationwide.

Having made links with the American Nissen Corporation and its founder, George Nissen, Ted left teaching in 1956 to set up Nissen International which manufactured trampolines initially under licence and later, independently of the American parent, with its own manufacturing plant in Brentwood, Essex. The operation was very much a family concern with Ted’s wife, Doreen, and son, Tim, also involved.

As well as manufacturing trampolines, Ted was also instrumental in the development of the sport. He instigated the first UK Trampoline Championships and helped formulate the rules of competitive trampolining and became the first Vice-President of the International Trampoline Federation (FIT) in which role he organised the first four World Championships.  He later helped establish the British Trampoline Federation (BTF) independent of its gymnastics parent body and became its President in 1981. However, in later life he became frustrated and critical of the bureaucracy of both the FIT and BTF but, regardless of this, he can claim to be one of the founding fathers of the sport.

However, it was in another aspect of Nissen International’s operation that Ted would come to the attention of the leisure management profession. Finding that his factory in Brentwood had spare capacity, he started manufacturing sports and fitness equipment for the emerging British sports centre market. The Nissen “Multi-gym” was the staple of most centres fitness rooms (before they were called gyms!)

However, Ted’s link to RecMan and the profession developed in another direction as well as he became a regular speaker at these annual events and a much in demand presenter at seminars and conferences wherever leisure managers gathered together.

An inspiring and amusing speaker, Ted became a  guru to a whole generation of managers by effortlessly illuminating and translating the best principles of commercial and manufacturing management and making it understandable and accessible to the mainly public sector leisure service industry.

In 1975 Ted was given the National Award for Outstanding Contribution to British Marketing by the Chartered Institute of Marketing in recognition of his marketing skills. Ted wanted to use this award as a way to improve the quality of recreation management so, again with Harry Littlewood, his company sponsored the first Sports Council Award for Sports Centre Management. As well as involving the leisure professional bodies he brought on board the British Institute of Management to provide the expertise and impartiality required to adjudicate the award and make it a meaningful learning experience for all who entered.

Ted left Nissen in the early 1980’s when it was bought out by Universal. However, he was not about to sit back and rest on his laurels; so with his long term P.A. ,Jean Mackenzie ,  he established “Blake Training” his ground breaking training and educational company which became the “go to” training consultancy for anyone in the profession  seeking to improve customer service and marketing.

When Ted died in 1988 the profession lost a great supporter and contributor and no less a figure than George Torkildsen (cf) was inspired to edit a book, published by Sport England and ILAM, commemorating Ted’s contribution to the leisure industry and containing many of his best quotations and aphorisms. The title rightly called him “Ted Blake an Inspiration to Leisure Managers.”

“Although the word is often misused, in Ted’s case he really was a legend in his own lifetime and a legend in the short history of modern leisure management.”